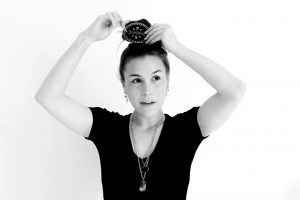 Born on top of the world in Nuuk and has since lived in Greenland, Denmark, America, South Africa and England.

She completed her bachelor from The Animation Workshop in Viborg, Denmark, in January 2012, and has since worked in the games- and commercial industry, working mainly with asset-developement and general VFX-work.

In 2015 she joined Film.gl, and helped kick off the Location Greenland Conference 1.0 in Nuuk, where she worked with various Ad Hoc assignments before, during and after the conference. She continued down the administrative path, when Film.gl held Location Greenland 2.0 on October 2016 in Kangerlussuaq.

In January 2017 she moved back to Nuuk, Greenland, where she switched to line-producing and project-managing, working under the tutelage of Nina Skydsbjerg Jacobsen at PaniNoir.

She is now working as a writer, illustrator and project-manager on an encyclopedia of greenlandic mythological creatures with Milik Publishing, along with 7 other nordic artists and a team of academic researchers, which is planned to be published in 3 languages in the fall/winter of 2018.

Fully proficient in danish and english, both written and spoken, and way-stage level greenlandic.