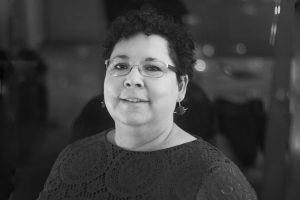 Ane Lena is a self-taught filmproducer based in Ilulissat, Greenland, home of the spectacular and world famous Ilulissat ice fjord.
In 2017 she executively produced Greenland’s first fantasy/adventure feature film, “In the Land of Our Shadows”, directed by her 22-year old son, Marc Fussing Rosbach.
She is well-known in her local community as well as outside the city, and has many formidable contacts for both outfitting and the like.
She is fluent in both Greenlandic and danish, and is an intermediate english user as well.

Feature film: Akornatsinniitut – Tarratta Nunaanni (Among Us – In the Land of Our Shadows)